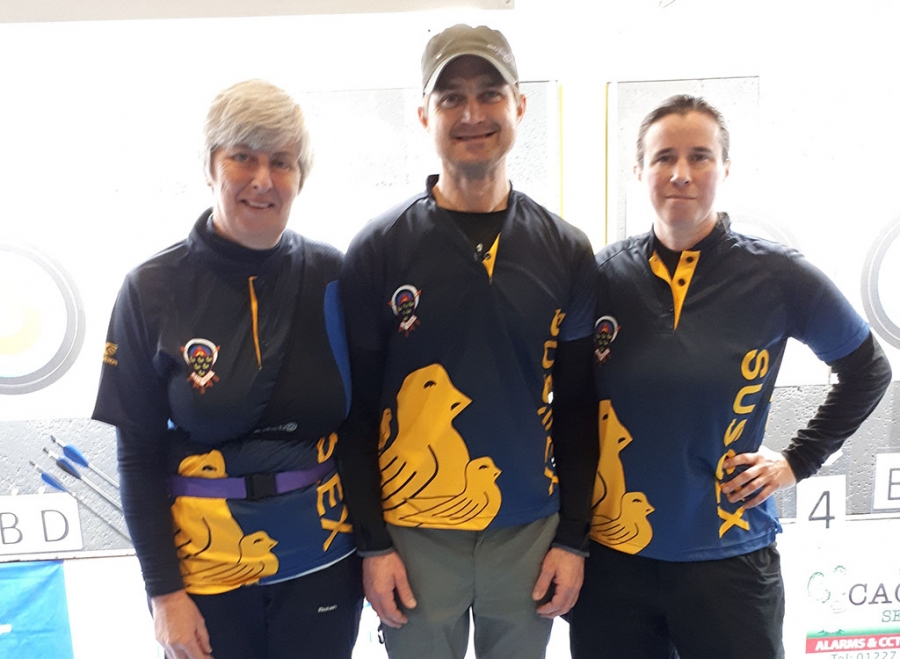 On Saturday 22nd February 2020,  Kent  hosted a  4 Way Inter County  Competition at  Sittingbourne Community College. Archers from Kent, Surrey, Sussex and Essex congregated to undertake a Portsmouth Round, each County fielding a team of 4 archers in each of the  bow styles Compound, Recurve, Barebow and Longbow.

Due to clashes with other Archery commitments the Sussex team was missing several of their regular members which meant that  there were several new faces on the team. Having been encouraged by  their Worthing Club mates to submit  their  Competition scores to the County Rankings officer, it was with much surprise and trepidation that Jen Diplock and Nicky McDowell accepted their invitations to join the County Team. Together with seasoned County team Pro Gavin Sutherland, Worthing Archery Club was well represented.

Shooting alongside so many accomplished archers was quite awe inspiring, and maybe a little daunting, which despite their best efforts may have slightly affected Jen and Nicky on their debut performance, but as Jen said afterwards 'I met  lots of nice people, got some good advice,  and  got a nice new Archery Shirt!'

View the embedded image gallery online at:
https://worthingarcheryclub.co.uk/news/tournament-news/item/94-worthing-damsels-in-county-debut#sigProIdcdac709813
Login to post comments
back to top