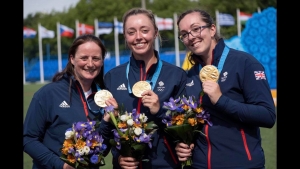 It is with a keen eye, that members of the club have been following the progress of the GB Archery team in their recent efforts on the International Archery circuit.

Our very own club member, Bryony Pitman has been competing as part of the GB Ladies Recurve Team, who have recently scooped a Bronze medal at the World Championships in Hertogenbosch, Netherlands and a Gold medal at the European Games in Minsk, Belarus. Their success has also earnt the team quota places at the 2020 Olympic Games in Tokyo.

Huge congratulations to Bryony and her team mates on their fantastic achievements and we wish them every success for the future. 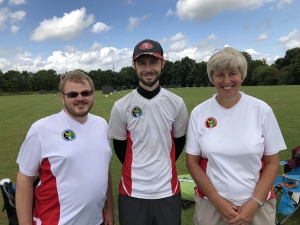 Once again Worthing members had a very enjoyable and successful weekend at the Sussex County Archery Association Championships.

On Saturday 20th July, the team comprising Dan Mitchell, Nicky McDowell and Mike Ellis (competing in his very first external competition), were challenged by a very tricky, blustery wind and some very competent opposition. Dan and Nicky shot a WA70 (70m) and Mike Ellis shot a Metric 122-30m (barebow). Both Dan and Mike won Gold in their respective categories and Nicky was just outside the medals in 4th place.

On Sunday 21st July, the team comprising Dan Mitchell, Nicky McDowell, Gavin Sutherland, and Dan Sutherland took up the challenge of a WA1440 round (Dan S shooting the Junior Metric 5). After 144 arrows over 4 distances, Nicky earned a Bronze medal in the Sussex Ladies Recurve, a Bronze medal for 3rd highest combined score over both days, and a Bronze team medal in partnership with Dan Mitchell. Gavin Sutherland earned a Silver medal in the Gents Compound, having spent much of his time trying to keep track of his son's progress at the other end of the shooting line!

But Sunday really was a day about two Dans. Huge congratulations must go to 8 year old Dan Sutherland, who not only won the Junior Gents Compound Metric 5, but also had the highest score of ALL the archers taking part (Juniors and Adults), with a whopping 1333 out of a possible 1440. (49% of his arrows scored X or 10) An incredible achievement, well done Dan.

And last but not least, Dan Mitchell, already riding high on his success on Saturday, romped home with a resounding win in the Gents Recurve, the Gents two day combined, a Bronze team medal, and the SCAA Gents Recurve Championship medal.

Congratulations to all on a superb performance. 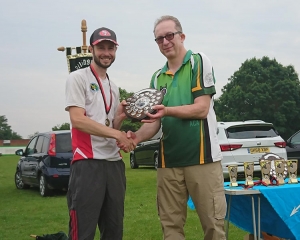 Around 40 archers shot on the Saturday, with a few more joining on Sunday.

With the sun shining, and a slight breeze, Dan Mitchell won gold and scored a PB of 953 on the Saturday. Sunday was overcast and less breezy, giving Dan great conditions to smash his PB from the previous day, and take the gold again, with a score of 1035. He can claim for his Blue (1000 points) Rose award with that score. Dan was then awarded a plaque for winning the overall double round. The plaque records the winners of the tournament all the way back to 1984!

Dan also won some toffees and a chilli plant in the raffle! 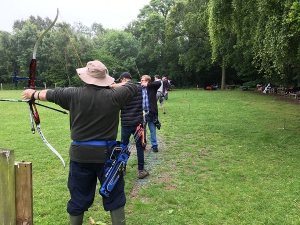 Despite the inclement conditions of the Great British summer a dozen archers turned out for round two of this season’s “sunburn” competition. The leader board currently looks as follows:

The league secretary has promised to try harder to arrange for better weather for round three, which will be held on Sunday, 28 July. 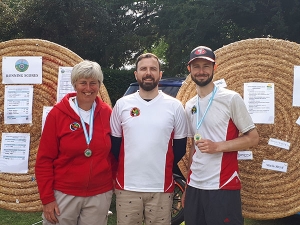 On Sunday 2nd June, three members of the club participated in the annual Ditchling Windsor competition. Approximately 40 adult archers and 4 Juniors from clubs all over the county gathered on Ditchling's Club field in the warm sunshine and a gentle breeze.

Dan Mitchell won Gold in the Gents Recurve scoring an impressive 922 out of a possible 972 points. Nicky McDowell won Silver in the Ladies Recurve, and James Wilson avoided the Slow cooker on offer in the raffle and took home some Cider for himself and some Waitrose Vouchers for his wife - and a PB score.

A good day was had by all at a well organised and friendly competition. 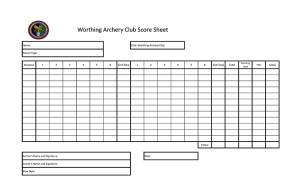 The scoresheet that can be downloaded from the bottom of this page can be used to score any round (with the exception of the Sunburn League as this uses handicap scores). Please ensure that the scoresheet is complete detailing the round shot and to have it counter signed by another archer before submitting it to the records officer. 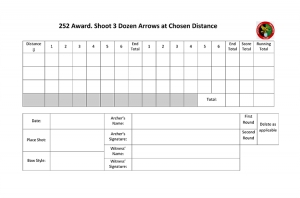 Scoresheets for the 252 Award can be downloaded from the link at the bottom of the page.

Please ensure that all scoresheets are completed and counter signed by another archer before submitting them to the records officer. 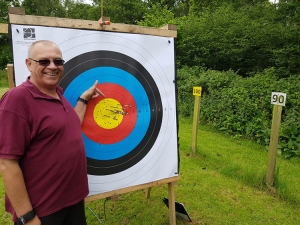 The first round of this summer’s Sunburn league was held last Sunday (26th May).  We had a large turnout of archers, including quite a few new members.

The results were good with a number of handicaps being reduced.  The leader board currently looks as follows:

A special mention goes to Trevor Little and Linda Howarth for all gold ends at 90 and 60 metres (respectively).

If any members haven’t shot in the league before, but want to please sign up for round 2 on 16 June.  It is a fun, relaxed atmosphere with friendly support from everyone. 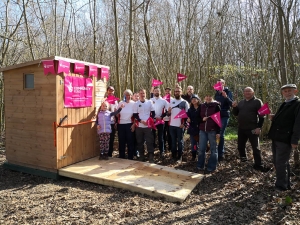 We are pleased to announce that our new eco-toilet has been installed and it was officially opened on Sunday, 24th March 2019 by Freya Bezencon.
The club would like to thank everyone involved with its acquisition and installation, particularly Neil Gunner for sourcing both the toilet and the funding, Graham Whittington for arranging transportation, Trevor Vaughan for constructing the base and the ramp, and Dan Mitchell for the plumbing advice.
The committee would like to thank the Community Fund of the National Lottery for their generous grant that made the provision of the new toilet possible.

If you notice that the toilet needs restocking or attention please email one of the committee members so they can resolve the issue.  If they don’t know; they can’t fix it. 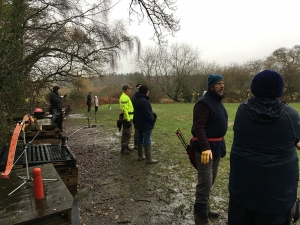 The fifth and final Frostbite shoot of the 2018/19 season last Sunday, 3rd March, was a wet and windy occasion.  The unfavourable weather conditions did not deter a respectable number of members attending. A big “thank you” is needed for Paul Murray for organising and arranging this season’s Frostbite tournament, although if he could try harder on organising better weather next year it would be appreciated!

The results were as follows:

With the winter season concluded, we are now looking forward to the start of the summer season with the first Sunburn shoot on 26th May.