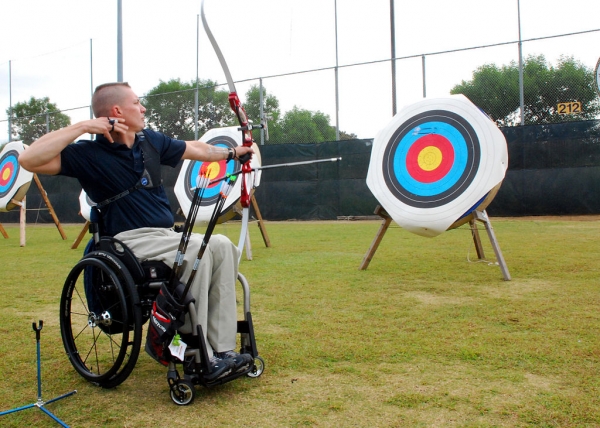 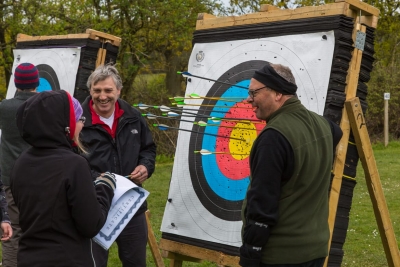 Please contact the secretary to be added to the waiting list for our next course. Our courses are always over subscribed so please register your interest early.

Membership is open to anyone over the age of 10 years old (younger children may be accepted at the discretion of the committee) although juniors must be accompanied by a parent or guardian at all times whilst shooting. The junior section of Worthing Archery Club is run by Doreen Cannon. Doreen is an archer with many years experience and also our child protection officer. Please contact Isla for further information on our Junior section. Any adult wishing to join the club must have successfully completed a recognised beginners course or be a current member of Archery GB. All members and beginners must abide by the Archery GB Rules of Shooting and follow all safety requirements and any specific club rules.

If you would like to take up archery you need to go on a Beginners Course which are designed to not only get you shooting quickly but to do so safely. Our beginners courses run during the summer months and are typically run for two whole days over one or two weekends.

Our courses are some of the most popular in Sussex and we typically run at least three courses a year. Due to their popularity our courses fill up fast so we would recommend joining our waiting list so that we can get you on the first available course. You can do this by contacting our secretary.

We normally hold beginners courses during summer months. Our beginner’s course operates to strict safety standards but it is also designed to make your initial experience of archery an enjoyable one.

Beginner Courses Cost £65* and Include the Following

* the course fee is non-refundable and non-transferable.

On completion of the course, all successful beginners, i.e. those who are able to demonstrate the required level of competence, are issued with a certificate, and are then eligible to join the club. All members are expected to have their own equipment. However, if you are a beginner, then we strongly advise that you do not buy any equipment before first speaking to one of our coaches because it is very easy to spend money on equipment that looks okay but is in fact not right for you. When you join Worthing Archery Club, you are welcome to shoot alongside regular club members and, if you have any queries (no matter how trivial they may appear), then simply ask. Our members are a friendly bunch and can usually point you in the right direction! Club target days are Wednesday, Friday, Saturday and Sunday, but when you reach a certain standard you will be able to shoot on any day of the week. However, you must abide by Archery GBs rules of shooting including Solo Shooting.

I thoroughly enjoyed the course and learnt more than I thought possible in a two-day course.

I completed the beginners course at the weekend and thoroughly enjoyed it. So much so that I signed up and borrowed a bow and equipment there and then!

People were all welcoming, Communication was on top form. It was very well coordinated. All instruction were very clearly made and all WAC members were very happy to help

The clubs website is excellent and gives a favourable impression of a club that is well-organised and managed.

The coaches on both days were friendly, knowledgeable and enabling. They pitched the level of tuition perfectly so that I didn’t feel overwhelmed by new information but was sufficiently challenged by the content to engage with the process and think about what I was trying to achieve. Really excellent and much appreciated.

We all had a fantastic time despite it being a bit cold. Everyone enjoyed the course and all seem to have caught the archery bug.

Thanks for making us very welcome. Thank you to all the coaches.

Amazing! I love it so much I want do archery every week.

Published in About Our Club
Read more...
Rate this item
(3 votes) 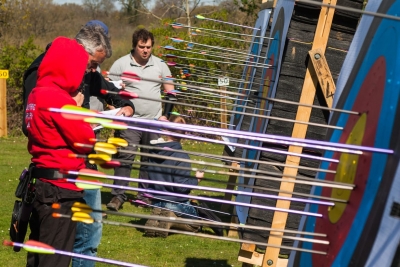 Worthing has a long association with the sport of archery. As long ago as 1860 Worthing Archery Society, occasionally also referred to as Worthing Archery Club, was shooting at Steyne Gardens just off the seafront. During Victorian times archery was a popular sport as it was practiced by many British monarchs and was considered a graceful exercise that taught dexterity. Archery was also one of the few sports in which women could compete alongside men, indeed archery was one of the first organised competitive sports for women. The details of the club that shot in Worthing during the 1800's has sadly been lost to history but what we do know is that the club in its present form was founded in 1949.

Records of the first club committee unfortunately do not exist but in 1959 the officers were:

Alderman Osland was the Mayor of Worthing, and when he died his daughter Gabrielle took over the position of President, and the club enjoyed many winter days shooting clouts in the field near their farm. The Club’s official home in those days was Worthing Football Club and all members were automatically members of the football club. This enabled them to use the ground for practice, matches and tournaments, and the hall for other events. The club was small at that time with around 20 members taking part in club events and tournaments. One innovative adventure was a league to compete against overseas archers which proved to be very successful; Worthing used to shoot against two Australian Clubs - Bunbury and Benara. Two of our members visited Benara, which is near Perth, and presented them with a silver plate. Also one of the Club’s members won the Bunbury postal league and still has the award.

Tommy and Elizabeth Dymock also set about forming the Sussex County Albion League in the 1950’s, designed purely to allow archers of all levels to meet others on a friendly basis, at their various grounds. This was another successful venture for the club, with the result that it is now implemented throughout the county and is still in existence. Now run by Sussex County it has developed into five leagues with cups to be won. It is interesting to note that despite equipment greatly improving over the years, and higher scores - archers still find it a struggle to achieve the final accolade of Grand Master Bowman - this is the reason that the classification of Bowman was introduced, so even the very best have something to strive for.

As the club grew through the 60's and 70's bigger and better grounds were needed, so we left Worthing Football Club for a small piece of land in Worthing woods. The new club ground must have played its part in inspiring the members to achieve greater success and meant the committee could explore the option of developing field archery. Gary Kinghorn, Tony Zottola and Mark Caine went all over the country attending field archery ranges and learning all they could about the sport. Gary Kinghorn then moved from target to field archery and soon excelled at this and was selected to shoot for Great Britain on several occasions, becoming World Champion. Our annual field shoot has now become a very successful tournament; we were selected to host the All British Field Championships in 1999 and have since hosted the All English, and regularly host the Sussex County Field Championships.

In more recent years the committee has focused on developing the club, facilities and membership and we now boast a membership of around 100 archers of all ages and abilities from complete beginners to elite archers who have competed in the Olympic Games. We are now one of the few clubs in the country to offer outdoor, target and field archery 7 days a week with an indoor facility for the winter. Most clubs in Sussex only offer shooting on 1 or 2 days a week and very few offer both target and field archery. We also have a Junior Club coached by Doreen Cannon, again with members from complete beginners up to County Champions. We also have an active program in place for regular investment in the club providing not only regular maintenance but also new equipment and now offer a bow loan service to beginners who join our club after completing one of our beginners courses.

Gary is not only a former World Field Archery Champion, but is also the only person in Sussex ever to shoot a perfect Albion score of 972. Gary coached fellow club member Gavin Sutherland at the Olympic Games in Rio 2016. He also coaches Bryony Pitman & Petra Ginman and last year was asked to be the assistant Team Manager for the World Field Championships in Ireland.

Doreen Cannon has received several awards over the years including the Worthing Sports Council Sportswoman of the Year for outstanding services to sport and by Sports England in 2006 for Outstanding Services to Sport. Currently she is County Secretary for Sussex and Chairperson of Martlets Guild of Archery Coaching.
Published in About Our Club
Read more...